HWAC dig volunteers Elizabeth Blondeau and Douglas Culpepper continue in our interview series, putting some of the other diggers and staff on the Ophel Excavation dig site in front of the camera. Here is part 2–stay tuned for further installments.

It’s been four months since our first post and the news of our excavation experience continues to spread through the efforts of Popular Archaeology as well as other online archaeological communities.

On November 30, popular-archaeology.com published an article summarizing our post “Exposing the First Temple Period.” The article highlighted Dr. Mazar’s excitement over reaching first temple period floors that have yielded an abundance of 10th century BCE pottery, as well as exposing walls that reveal the use of a very large structure. The article said, “Like the other structures within the vicinity, a building of possible monumental proportions may be emerging. … Mazar and others suggest [these] may be the remains of structures attributed to builders during the period of King Solomon in the 10th century BCE.”

The periodical also explained part of the success of the excavation so far: “The new finds are consistent with the spectacular finds already uncovered in previous excavation seasons in this, the “Ophel” area of old Jerusalem, just below and south of the current Temple Mount ….”

In addition, HolyLandPhotos’ Blog also promoted the same video post along with another video post, “Restoring Byzantine Pottery.” They spotlighted Dr. Mazar’s quote about the accumulation of pottery found from the first temple period being perhaps the largest assemblage in Jerusalem so far. Another site, bibleplaces.com, mentioned our post “The 10th Century B.C.E. Scarab” in their “Weekend Roundup.”

With a few weeks of digging left, we’ll look forward to sharing more finds with the archaeological community and our interested audience.

HWAC dig volunteers Elizabeth Blondeau and Callum Wood kick off a series of interviews, putting some of the other diggers and staff on the Ophel Excavation dig site in front of the camera. Here is part 1–stay tuned for further installments. 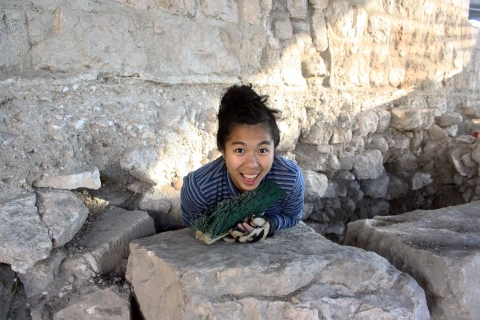 Check out our latest photos in our November photo gallery:

Meet Ruth Ribak, Ophel Excavation Restoration Expert. In this video, Ribak explains the process she goes through to reconstruct some of the pottery found on the dig.

Once excavators reach remains from the First Temple Period, all the dirt is carefully dry sifted and then wet sifted. In Area A several floor layers also emerged in November. 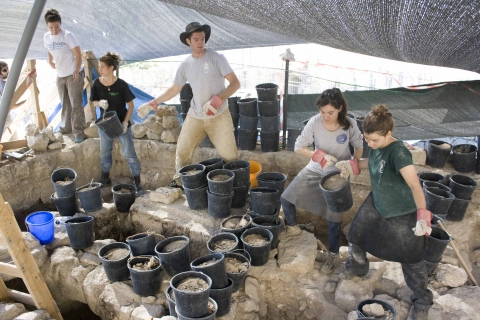 All of our photos from October have now been added to the galleries!

Check out our latest photos in:

Dig volunteers demonstrate the process of dry sifting and talk about what it’s like to work on the dig. At the end of October, workers in Area A uncovered a scarab beetle from the 10th Century, B.C.E. The scarab was used to seal letters and is of Egyptian design. Dr. Eilat Mazar theorizes, “We know King Solomon married an Egyptian princess. Was it hers?”